The 10th anniversary of Mosaic, an initiative of The Prince’s Trust, was formally marked in London at a recent event hosted at Thomas Goode & Co, but the charity’s connections to Yorkshire run deep. Some of the charity’s original supporters were Yorkshire based professionals. 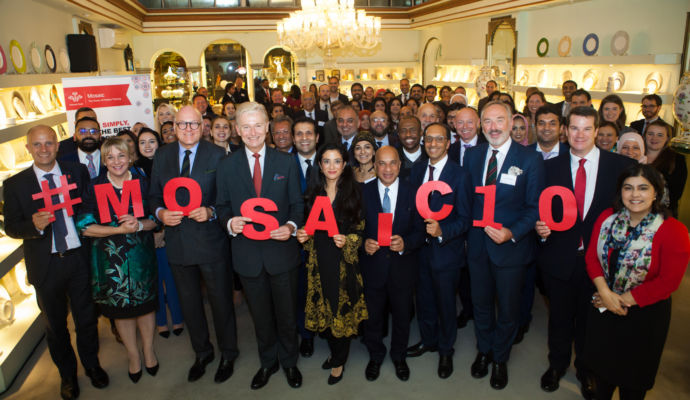 Founded by HRH The Prince of Wales, Mosaic inspires young people from deprived communities to realise their talents and potential. Mosaic’s mentoring programmes in schools and prisons are delivered by volunteers and lift the aspirations of young people and close the gap between those aspirations and their attainment. Since its inception Mosaic has worked across 1,448 schools and prisons with the help of over 7,200 mentors helping to benefit over 40,800 young people nationally.

In the Yorkshire region over 10,000 young people have benefitted from mentoring over the course of the last 10 years, with the charity seeing an increase in the number of local people volunteering to become mentors.

Tariq Shah, Director of the Doncaster based property investment and development company Vigo Group is a founding Board member of Mosaic, having played a pioneering role laying the foundations along with a small group of other like-minded and keenly motivated individuals for an organisation that would, via mentoring, support young people, develop their confidence and facilitate the opportunity to further themselves in their lives and careers. He is an active mentor in South Yorkshire schools having been trained by Mosaic for the role.

“Being a mentor with Mosaic is an exceptionally rewarding way to make a difference by providing a positive role model for young people, showing them that success in careers and education will benefit them and the generations that follow”.

Through their ‘Vigo in the Community’ initiatives, Vigo Group have long been supporters of charitable programmes and have played a significant role in developing and promoting Mosaic since its inception in Yorkshire and around the UK.

Earlier this year Vigo Group hosted the national finals of the Mosaic Mentor of the Year Awards, bringing the prestigious event to Doncaster in the presence of HRH Princess Badiya bint el Hassan, founding Chairman of Mosaic.

Sarah Khan-Bashir MBE is the Managing Partner of Shire Solicitors based in Bradford and was one of the first Mosaic mentors in the region 10 years ago. She is a Mosaic Board member and Chair of Mosaic’s Yorkshire Regional Leadership Group:

“Seeing the impact that the Mosaic programmes have on young people in Yorkshire and nationally is hugely rewarding. Inspiring young people to bridge the aspirations achievement gap in order to realise their potential leads to more confident and stronger communities. I am very passionate about the work of Mosaic. It’s a simple but incredibly powerful initiative”.

Further information about becoming a mentor with Mosaic can be found at their website www.mosaicnetwork.co.uk or by contacting Vigo Group.